The most powerful pre-workout Trec in a liquid shot

✅ Mega focus for a long time

✅ Extreme power and stimulation during training 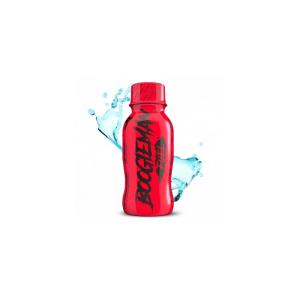 ✅ contains a complex of beta-alanine, caffeine, L-arginine, L-citrulline and inosine

✅ reduces the feeling of tiredness and weariness

✅ helps in the proper functioning of the muscles

✅ helps in the proper functioning of the nervous system

Boogiman contains ingredients that safely stimulate, but also those that allow you to increase focus on training and fulfill its assumptions in 100%. In this pre-workout, we will find classic stimulants such as caffeine or theamino acid tyrosine, which are used to produce exercise hormones (adrenaline, thyroxine) necessary for the full energy mobilization of the system. Boogieman Trec additionally contains substances that will increase concentration and training concentration, such as ginseng extract or Rhodiola rosea extract, which facilitates concentration, increases activity, resistance to stress and is used in states of physical and mental exhaustion. The pre-workout also includes theanine, which is present in high concentrations in green tea, and is a psychoactive compound thatreduces stress levels and improves cognitive ability.

Boogieman contains beta-alanine to improve energy efficiency. Acidification is the main cause of fatigue and muscle failure in high-powered efforts. This is the moment in training when during the main series, after the first few repetitions, you feel that you can not do more of them, and you have to stop. The more carnosine in the muscles, the greater their ability to perform short-term but very high intensity efforts. The only way to increase the amount of this muscle peptide is to supplement with the amino acid beta-alanine, which Boogieman contains.

Boogieman guarantees the effect of a muscle pump. The effect of the muscle pump is due to the increased synthesis of nitric oxide (NO), which has a dilating effect on blood vessels. Thanks to it, more blood flows to the working muscles, and with it also oxygen, energy and nutrients. The muscle pump also means faster removal of exercise energy by-products from the muscles, the accumulation of which prevents further muscle contractions. Boogieman contains two important amino acids from which the body can produce NO: arginine and citrulline. Yes, the body produces NO from arginine, but having citrulline at its disposal, which it can convert back into arginine, it is able to do so longer and more efficiently. The composition of Boogieman includes arginine in the stable form of alpha-ketoglutarate (AAKG) and citrulline as citrulline malate.

Boogieman goes a step further in terms of the muscle pump effect, as it contains ALA (alpha-lipoic acid), which is a powerful antioxidant that fights free radicals formed in large amounts during training. What do free radicals have to do with the pump? It turns out that a lot, because NO has a wide range of functions in the body and, apart from stimulating the muscle pump effect, it is also a strong systemic antioxidant. The presence of ALA in Boogieman increases the amount of NO that the body will be able to use to obtain the desired muscle pump.

This pre-workout contains a large dose of magnesiumnecessary for muscle contraction and B vitamins, which the body especially needs during exercise energy processes.

SET OF SUPPLEMENTS FOR STRENGTH AND ENDURANCE

Collagen Complex – A set of supplements

TrecNutrition.nl is an Online Store that offers a wide selection of food supplements, sports accessories, and fashionable sports clothing. The company was founded in 2014 and aims to promote the Polish brand of this type of products in the Benelux countries.